Weekend Away to The Brecon Beacons

Recently I started suffering from burn-out. The kind of burn out which makes you feel so low you feel unmotivated to do anything you love, from your job, to seeing friends and family to going out. Legit, all I wanted to do was sit on my sofa and watch friends when I got in with a bottle of wine (this is a major sign all is not well with me).

Well, it turns out city living affects the best of us.

My three best friends, Libby, Monika and Sara were all feeling a similar way. So, we got onto a Group FaceTime (always hilarious, have you ever tried getting 4 people to talk on the phone during their lunch breaks?) and organised a holiday together.

So, with the intent on it being

A. Easy enough for us to drive too (Libby is the only one of us who can drive*)

B. In the arsehole of nowhere and beyond. No WiFi? Good. No mobile reception? Perfect.

C. Somewhere none of us have gone before. I’ve spent very little time actually exploring the UK as I grew up abroad (still a bit crap at UK geography)

*with a UK drivers licence. I’ll get abused by the other two if I say they can’t drive when they can, just not in this country

And for some reason they also wanted to hike.

With many video group chats, we decided on the Brecon Beacons. Other top choices were Margate, Wales and Cardiff in general or Somerset- Libby had been there before and she highly recommended it.

We found an adorable Airbnb in Kilpeck, which is still in England, on the border of Wales and we decided to go on a weekend.

So we left on the Friday, with all of us getting out of work early, and we drove in Libby's car three and a half hours to what was called a farm-stay but it was more like a luxury barn/cottage on a remote hill.

As soon as you get out of London, and onto the motorways you really start to see the kind of greenery and the fields in the countryside that Britain isn't really known for these days but I definitely think it’s massively underrated in terms of beauty.

When we got off the motorway and onto the more remote, twisty-turny back roads with lots of hills we knew that we were getting close.

Then we saw the Brecon Beacons in the distance, and we knew that we were really close. So we pulled into the farm-stay at sunset, after driving Libby’s little car up a gravel hill, much to the amusement of sheep nearby.

Upon arrival, It was beautiful. We spent that evening getting unpacked.

And that evening we just drank wine and laughed around the table and caught up with each other because it had been such a long time since we'd actually sat down together and been able to talk without the distractions of life. Where we were staying there was no Wi Fi and very little phone reception, which was actually a blessing in disguise as it meant that none of us were distracted by our phones.

In the farm-stay itself there was an apartment above a barn, with two single beds were myself and Libby stayed and then there was the main house which was about two metres away, across a lovely little gravel courtyard area where the other two stayed. In the cottage, there was also the kitchen and living area as well.

We sat outside after this in the pitch black, and didn't speak at all. We just looked up at the night sky, at the stars which you could actually see (unlike London). It was so quaint and idealistic where we were staying- It was on the hosts farm however we rarely saw them- only once in fact.

I enjoyed kind of having that level of privacy but also knowing that there was somebody close by in case anything happened.

We woke up on the first full day, the Saturday, to the sound of birds chirping ala Snow White.

And we got ready, cooked pancakes together with yoghurt, honey and homemade jam. It was delicious. We decided that day that we would spend hiking and absorbing the nature.

We decided to go into the Brecon Beacons, which were about an hour away drive-wise. So, instead of driving all that way in one go, we decided to stop off at a couple of stops on the way we stopped off at Abergavenny Castle, which was a beautiful bit of history.

We then stopped off at a Viaduct which again was beautiful and quite momentous to look at, which gave you a shaky feeling in your legs when you looked up.

Continuing on our way to the hike, we arrived at a gravel car park to a slight mist and rain in the air- it was quite grim weather.

So, we ate lunch in the car- we made our own sandwiches (being Londoners it was avocado, with sun dried tomato and hummus).

And then we set off the hike. It was about four and a half hours in total and the scenery was stunning. The weather even cleared up after the first hour and it was a perfectly amicable, bland Saturday afternoon, weather-wise.

We walked around four waterfalls - It was just amazing enjoying the scenery.

Admittedly, I did have an asthma attack halfway through.

But aside from that, it was absolutely amazing. We walked behind a waterfall, we paddled in a freezing cold stream. 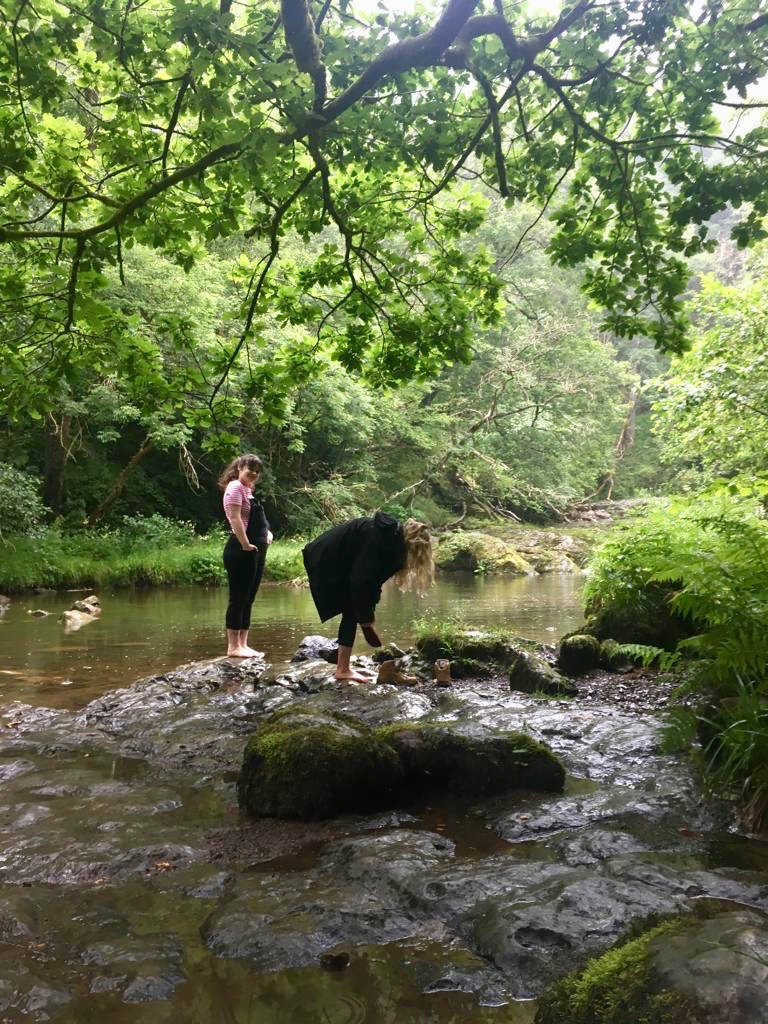 We were even mostly by ourselves. There was a couple of other families but generally it was very isolated which i appreciated a lot.

The hike itself I would probably give a 3/5 difficulty wise as we were walking through fields and up and down hills a bit, we were climbing on rocks at one point, and even dragged ourselves (literally in my case) through the mud.

So, feeling exhausted from our hike that day, we drove back. I cooked a delicious chilli for us all to share around the table while we drank beer and chatted the evening away. We were all too tired to do anything though, which kind of lends itself to the countryside atmosphere of doing nothing and relaxing and being at ease.

Then we went to sleep. I woke up with feeling very well rested The next day, we decided that we would check out as early as we could, despite the Airbnb host saying that we could leave whenever we wanted. We decided to go to Bristol on the way back as a little day trip.

Bristol was amazing. We actually didn't realise it but there was a Bristol street festival on at the time! There was a fantastic atmosphere as we walked from Clifton where we parked our car, all the way down to the city centre, all over the hills and just taking the scenery of this small city.

The street festival itself was amazing. The atmosphere was excitable, it was full of families and friends. There was lots of food stalls and there was live music- it was just a really great summer's day to enjoy the city.

However, a lot of us were feeling tired, especially me. We were also quite hungry, all we had for breakfast that day before setting off was eggs.

I'm going to do a bigger post on the city itself with my recommendations of where we went to eat, and where we went to shop. Very briefly though, it was a great cultural city- it felt like a much more laid back, less obsessed with itself version of Shoreditch.

Then, after a long day in Bristol we had a delicious roast dinner, eaten in about three seconds flat, then we walked back up to the car in Clifton, and drove off into the sunset back to London.

Overall, it was a fantastic break from the city. It was filled with everything I love doing- spending time in nature and shopping and eating and spending time with friends and shopping. I would also heavily recommend all of the places that we went to and stayed at!

Alresford, or Royston Vasey (a slice of quintessential English countryside)

mid-size gal with a dream

of body positivity for all

and a lifetime supply of